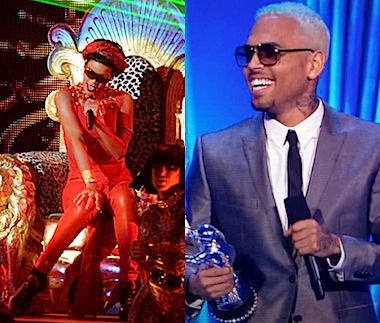 I’m watching the VMAs right now and as usual, I’ve been tricked into it.

Tricked by my own memories, memories of Rage Against The Machine, Triumph The Insult Comic Dog, and slave Britney Spears with a snake, (hell I’d take post-bald Britney huffing around to “Gimme More”).

This time, Kevin Hart hosts. He’s like tiny Chris Rock, without the humor. Lackluster Hart came out surrounded by midget bodyguards, then rhymed his way through some Laffy Taffy jokes, spending more time congratulating people than insulting them.

His big intro spiel was that he’s going to talk about things that MTV ‘doesn’t want him to talk about.’ Alas, the speech was approved by the show’s executives who replaced the truly taboo topic of Chris Brown and Rihanna (they were in the same room) with Drake and Chris Brown.

There were also jokeless mentions of Kristen Stewart (“if you’ve made a mistake, so what?”), Snooki (“congratulations, you’re a new mother), and Frank Ocean (“I salute you, sir”).

“We Found Love,” is of course the non-fiction account of her bipolar romance with Brown. The visual (which won Video Of The Year) almost romanticized violence as much as “Love The Way You Lie,” and features a cheap, thinner, blond replacement for “Breezy.”

And there she is, singing “We found love in a hopeless place” over and over, with Chris, who later won a Moonman for “Turn Up

The Music,” in the audience. But of course, no cameras even panned to him, and no mention was made of it except on the internet.

This is what I’ve come to expect. Thank god Katy Perry was there to subtly complain about never winning Best Pop Video. And Frank Ocean reminded me again to look up “why does everyone like Frank Ocean?”

He can sing in a REALLY high-pitched voice, but does that make the songs good? I don’t know.

MTV has watchable footage of Rihanna hugging and kissing Chris Brown at the Video Music Awards last night. This doubly proves my point that the most interestingly shocking thing going on there was not talked about or shown live.

Not that these two being “friendly” is THAT surprising. Since Chris was arrested for hitting her in 2009 they’ve been photographed at the same clubs, collaborated on a song, and Tweeted about each other. 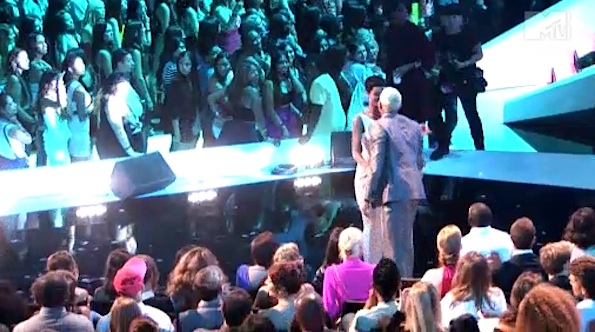 Rihanna also released how many songs and videos that seemed to relate to him in some way? Not to mention the countless magazine and television interviews where she’s mentioned him.

Just last month she told Oprah, “We have maintained a very close friendship ever since the restraining order was dropped,” and “I think he was the love of my life.”