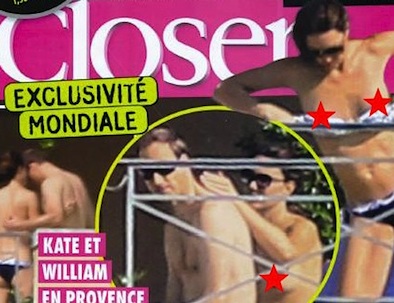 Like all [Disney] princesses before her, real-life British royalty Kate Middleton is now involved in a scandal of epic proportions.

A French gossip rag called Closer has released exclusive photos yesterday of Kate letting it all hang out at Chateau d’Autet in Provence.

TMZ reports that they are taking legal action, and called the publication’s actions a “grotesque” invasion of privacy and said it was “reminiscent of the worst excesses of the press and paparazzi during the life of Diana, Princess of Wales.” Come on Closer, do you really want to mess with this:

I fly like paper, get high like planes… all I wanna do is BANG BANG, and take your money.

Read: Kate Middleton Topless In Closer Magazine for all the very blurry uncensored pics that are making steam come out of Queen Elizabeth II’s ears. Keep in mind that she owns many guns, and vicious man-eating Corgis.