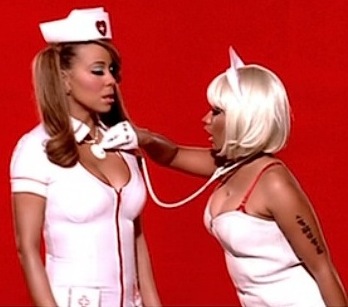 Nicki Minaj brought Queens, New York to American Idol during an audition in Charlotte where she said she refuses to put up with “her royal fucking highness” Mariah Carey, who she also calls “boring as fuck.”

See and hear it for yourself over at TMZ. There’s a partially audible video of Nicki going crazy, saying things like “if you say one more disrespectful thing to me … off with your head!”

During an argument that began over a contestant’s performance in North Carolina, Carey’s cool-headed attitude only seemed to send Nicki into more of a full-force, highly escalated rage.

“Whyyyy, whhyyyyy do I have a three-year-old sitting around me???” Mariah says. (That must have been when gumball-machine-turned-human Nicki Minaj reportedly threatened to knock her out.)

Let’s go over some stats, if these two were to ever physically duke it out, Long Island vs. Queens…

Even considering height difference, and giving them an even-balanced advantage by fighting barefoot (no high heels), I’d say the odds are about 8-1, in Nicki’s favor. Who do you think would win?“Up Out My Face,” remix off Mariah Carey’s Memoirs of an Imperfect Angel, released in 2010.

2 thoughts on “‘American Idol’ Judge Fight, Round One – Nicki Minaj Vs. Mariah Carey”