Remember the short-lived VH1 show Celebrity Eye Candy? It was mainly just a funny guy singing songs and explaining photos of celebrities doing everyday things like going to the grocery store or falling onto the sidewalk in a puddle of vodka-scented vomit.

This photo of Ben Affleck leaving a note on a car he knocked the mirror off of during a Saturday drive around Santa Monica, reminds me of the show.

If only I had a clever song to sing about the woman or man who now has Ben’s phone number, which he left on the note along with his name. Scratch that, change to: if only TMZ hadn’t blacked out his contact information. 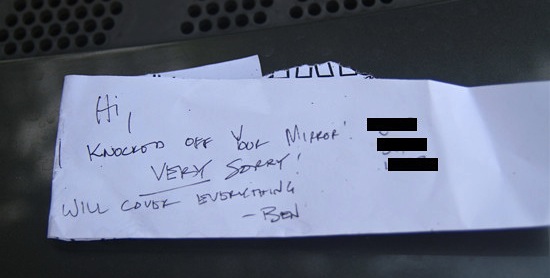 It would be a race between depraved internet junkies to see who could sell it to his stalker the quickest.