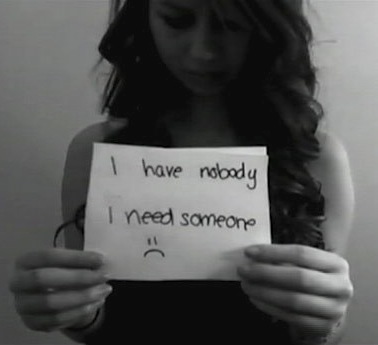 Police were called to the home of 15-year-old Amanda Todd on October 10 after she committed suicide in her home in British Columbia.

A month before her death she posted a video called “My story: Struggling, bullying, suicide, self harm,” and it is basically a list of reasons why she took her life.

In 7th grade Todd sought attention on webcam chats. One man who the police are currently searching for coerced her into flashing him. When she refused to do more he sent a screenshot of her chest to her family and friends which, on top of some of the usual impulsive decisions most teens make (sleeping with a boy who had a girlfriend), led to her being bullied at school.

Even after attempts at a fresh start, the man found her and, with the help of a fake Facebook account, used the naked screenshot as his profile picture.

“I then got really sick and got anxiety, major depression and panic disorders,” she wrote. “I then moved and got into drugs and alcohol … I can never get that photo back, it’s out there forever.”

Amanda attempted suicide several times before her eventual demise. Once after she was filmed getting beat up at school by a group of students wrote that they “hope she’s dead” on Facebook when she drank bleach and had to have her stomach pumped.

I hope you take responsibility. I hope you think about what you’ve done, and I hope you have a miserable life.

As a teenager I was diagnosed with anxiety, ADHD, bipolar disorder, oppositional defiant disorder (a bigger load of BS title was never invented), and depression.

Nobody bullied me (at least not like this) and Facebook did not exist. All I wanted to do was sleep.

I’m saying I understand why she did it and I think the various classmates that somehow justified attacking her verbally and physically because of a photo taken by a pedophile should be punished and lectured endlessly by authority figures that they respect and fear.

Save an extra fiery spot for guys who defend internet predators. 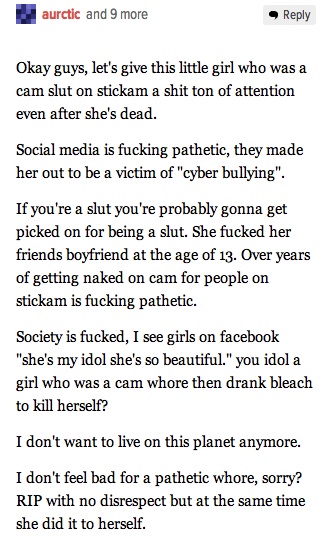 He got one part right. Society IS fucked.

6 thoughts on “To The People Who Bullied Amanda Todd…”