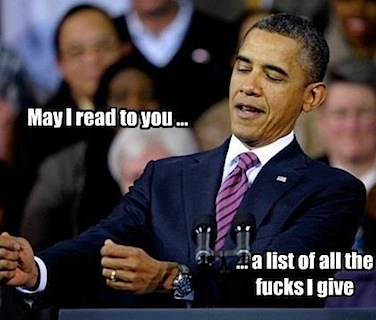 Wannabe politician and actual reality star Donald Trump is still obsessed with Barack Obama‘s past and history as some sort anti-American terrorist.

On October 24, after multiple guesses from the media about a new, big Trump announcement including one about Barack and Michelle divorce papers, he revealed the “surprise” that was somehow intended to shake up the election.

Trump is offering $5 million dollars to the charity of Obama’s choosing, if he agrees to release his college and passport records.

“If Barack Obama agrees (or has the universities and colleges agree) to give all of his college records and applications and if he provides all of his passport records and applications, I will give to a charity of his choice (inner city children in Chicago, American Cancer Society, AIDS research, etc.) a check for five million dollars,” Trump wrote.

“If he releases these records it will end the question, and indeed the anger, of many Americans. Their President will become transparent like other Presidents.”

I am happy to donate $5 million to a charity Barack Obama chooses. All I am asking is that he is transparent with the American people

Trump: I’m bored, make yourself transparent damn it! Obama: I’m not a magician or a ghost you twat.

Most underwhelming announcement in history, easiest $5 million ever.