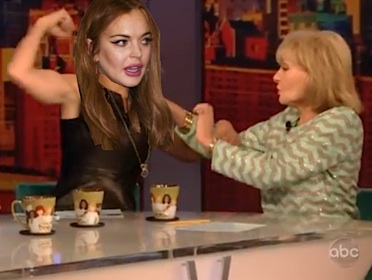 Lindsay Lohan doesn’t do interviews, which is why everyone was surprised when she agreed to appear on ABC’s 20/20 with Barbara Walters.

Fortunately, the surprise was dampened when Lohan backed out after learning that Walters wanted to talk about her train wreck personal life instead of just her train wreck Lifetime movie, Liz & Dick.

I guess Barbara, who was referred to as a “family friend” by a source, had a list of questions that just weren’t Jay Leno-y enough. For instance, the  alleged lies Lilo told the police after her car crash in June: off limits.

Being a friend of that family is very dangerous, but I know it isn’t true because I’ve never seen her making out with Dina, Michael, Lindsay, Ali or Cody.

Tara Reid is available and will probably talk about anything, but it’s just a suggestion.