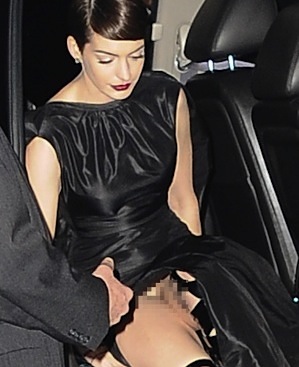 As we’ve learned from Jimmy Kimmel’s This Week in Unnecessary Censorship segment, some things look or sound worse when blurred or bleeped out. Anne Hathaway‘s bearded clam at the New York premiere of Les Miz is one of them.

Hathaway spent more time flip-flopping between laughing it off and crying in interviews than talking about what everyone actually wanted to know (what her screen matrons, Meryl Streep and Julie Andrews, would think).

“I think what I am going to do is whatever my next appearance is … I’m going to step out of the car in a blanket. You’ve got to laugh at it,” she told Four Seasons luncheon guests. Later, she used “devastating” “vulnerable” and “unfortunate” to describe vagpocalypse 2012.