On part one of The X Factor finale last night, the remaining three contestants were joined by their sort-of idols.

Tate Stevens and his dimples got Little Big Town, Simon’s group, Fifth Harmony, were paired with readily available Demi Lovato for “Give Your Heart A Break,” and little Carly Rose Sonenclar was gifted the bag of crazy known as LeAnn Rimes.

About a minute into “How Do I Live,” Carly announced “Ladies and gentleman please welcome the amazing LeAnn Rimes,” which shocked me, mostly because I forgot the song wasn’t by Faith Hill.

It was also shocking because there’s a certain stigma about LeAnn Rimes. It might partially be the media’s fault, but I’m pretty sure Country Strong and Walk The Line were loosely based on her life.

During the song, LeAnn, who sounded half good, half lazy, and half incompatible timing-wise, eventually settled on trying to distract Sonenclar from the inevitable (singing her own song better) by touching her arm during a big note.

Rimes’ attempts to transfer youth and a good metabolism out of Carly’s skin and into hers was thwarted by an awkward smile from the genuinely pure child songstress. 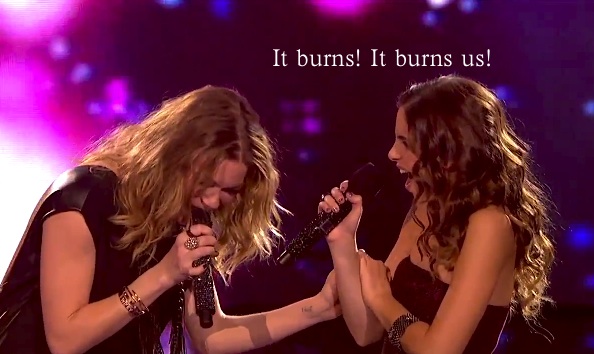 Really, LeAnn, who also became famous at 13, is present to remind Carly Rose of what she should avoid (bottles with surgeon general warning labels). Here’s a GIF that sums it all up.