Taylor Swift took it a bit too far when she hit beloved funny-ladies Amy Poehler and Tina Fey with a stone normally reserved for her ex-boyfriends. In the latest issue of Vanity Fair, Taylor (who I THOUGHT had an okay sense of humor) says there’s a special place in hell for the Golden Globe hosts who light-heartedly told her to “stay away” from Michael J. Fox’s son, joking that she “Needs some ‘me time’ to learn about herself.”

“You know, Katie Couric is one of my favorite people,” Swift told Vanity Fair’s Nancy Jo Sales. “Because she said to me she had heard a quote that she loved, that said, ‘There’s a special place in hell for women who don’t help other women.’”

I’d like to randomly mention that the favorited quote about women and fire/brimstone was originally delivered by Madeleine Albright at a WNBA game in 2006. I doubt our former Secretary of State would appreciate it being used maliciously against fellow feminists like Tina Fey.

As much as I usually defend Taylor and blame her silly but usually harmless antics on youth, this is a bit too outrageous and unnecessary. Like Kristen Stewart’s cheating scandal, this seems like the nail in the coffin of public dislike… 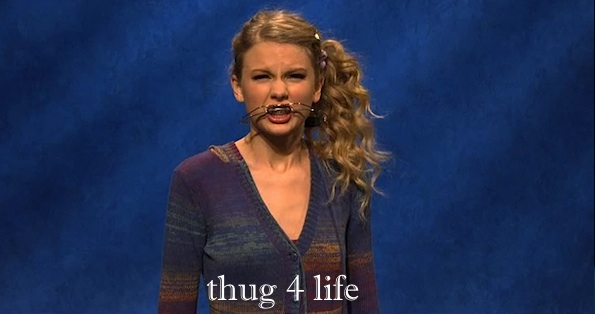 “For a female to write about her feelings, and then be portrayed as some clingy, insane, desperate girlfriend in need of making you marry her and have kids with her, I think that’s taking something that potentially should be celebrated-a woman writing about her feelings in a confessional way-that’s taking it and turning it and twisting it into something that is frankly a little sexist.”

Hey everybody, Michael J. Fox got in touch with me today and we are good. Thank you for having my back.

“Aw, I feel bad if she was upset. I am a feminist and she is a young and talented girl. That being said, I do agree I am going to hell. But for other reasons. Mostly boring tax stuff. “