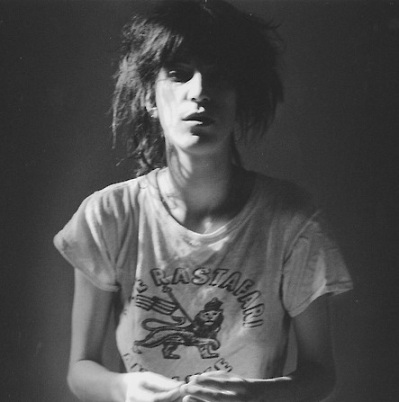 Richard Hell, member of Television and Voidoids, recently wrote a book chronicling his life as a vital punk innovator. In one excerpt, Hell (born Richard Lester Meyers in October, 1949) describes his love for “Because The Night” singer Patti Smith…

“She was a natural-born sex waif and a pretty-assed comedian. She’d step out with her hand on her tight-cocked hip, all casual, if in-your-face, and jack out mind and body gush, giggling at herself like a five-year-old, under her deep-set eyes and her coal-black shag, begging to be f*cked, skinny as a rod, massive t*ts…”

Story time. I just went to a Patti Smith concert at the end of last month and it was amazing. Transformative even. I’d be inspired to start a rock band if I had a lick of musical ability and didn’t already have a job as the operator of a snarky gossip website.

At the show, Patti, who is only a few years older than my own mother, talked about her love for My Bloody Valentine, Jennifer Lawrence (at one point, she pulled a Mockingjay pin out of her pocket that she said she bought through Scholastic for $2.50), and Television singer Tom Verlaine.

Before bursting into the 1976 alien-anthem “Distant Fingers,” she explained that Tom used to take her to the alley near CBGB in between sets and “watch for UFOs.” Something about him coming back for her if he was abducted…

Sounds like Richard Hell, who went on to marry another woman named Patty Smyth (lead singer of Scandal, also John McEnroe’s ex-wife), would also come back for Smith during an invasion.

(Spin says I Dreamed I Was a Very Clean Tramp doesn’t quite achieve the same “grimy golden dreaminess” as Patti Smith’s memoir, Just Kids, but does shine “its own dirty light.”)