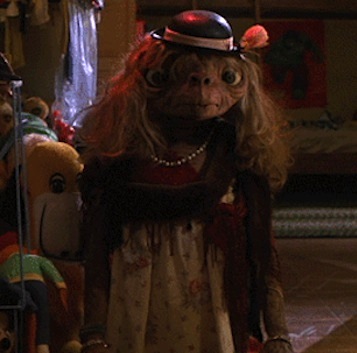 If Janet Jackson and Michael Jackson had an incestual child it would look and act like La Toya Jackson. Or E.T. in drag.

The shameless Jackson famous for having the childish laugh of the devil, baring her breasts for Playboy and starring in the reality show Life With La Toya has a new revelation.

She believes, at least in the withering tapestry she calls a mind, that the crotch-grabbing ghost of Michael Jackson tap dances in her house, the way he used to when he was alive, apparently.

La Toya said that bodyguards first informed her of the noises, telling Good Day New York that she was intrigued because her brother “used to do that every Sunday for two hours.”

“We go up there and no one’s up there … and just tap dancing,” she said. “And the dog barks at his room, the window, every single night at the same time … the dog doesn’t even know that that’s Michael’s room, and the security didn’t know … so it’s weird.”

This is the woman who said Omarosa killed Michael Clarke Duncan, so you tell me if she believes the things she says, or if she just wants attention.