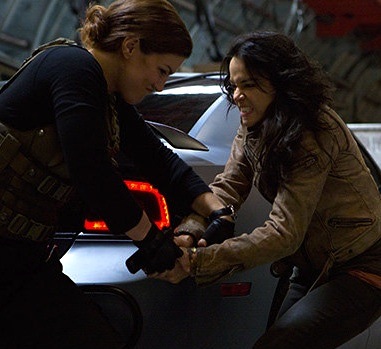 Michelle Rodriguez was brought back to life in 2011’s Fast Five only to get in a vicious, body-bruising rumble with Gina Carano’s cop character in this year’s Fast & Furious 6.

“It’s an action movie and I have so much responsibility just being a girl, like, in this lane of tomboyishness. I have to represent, [I said], ‘We have to make this real,’” Michelle told Access Hollywood on her scenes with the former MMA fighter and Haywire star. “I don’t mind getting the crap beat out of me, as long as it’s believable. For me, that comes first and foremost in the whole thing.”

I wouldn’t want to get in a fight with either (best case scenario: I die), but I’d definitely run away screaming a little faster from Gina. I mean, it actually says on her IMDb that she was “born under a tornado warning.”

In the clip, Michelle headbutts her, kicks her in the crotch, bites her and pushes her down the stairs (GIFs here), so who knows, maybe the TV law enforcement version of Carano is more of an equal match?

“I was so nervous! I kept bugging Justin, [saying], ‘Are you sure? Are you sure it’s awesome enough?’” she said. “Like really – this is a big responsibility.”

Because these movies are basically just an alternative to The Expendables, Jason Statham has a cameo and may appear in the seventh installment, due next summer.

It’s almost enough to make me want to download the movie once it comes out on DVD.