Gwyneth Paltrow got a little tipsy and divulged her true feelings about the Met Gala and many other things. Paltrow was hilariously honest with Jackie O and Kyle, telling the radio hosts that the Gala was staler than Nicole Richie’s pre-weight loss Taco Bell farts. This due to a Kanye West tempter tantrum, elderly people dressing like punks, and an identity mishap involving Psy.

Do you want me to be honest? It sucked. It seems like the best thing in the world. You think, ‘Oh my god, it’s going to be so glamorous and amazing, and you’re going to see all these famous people.’ And then you get there, and it’s so hot, and so crowded, and everyone’s pushing you. This year it was really intense. It wasn’t fun!

Here’s the part about 99% of the population, including celebs, not knowing punk from Top 40:

Everyone was dressed in punk … and I feel that we’re all a bit old to be dressed punk, you know what I mean? I didn’t. I just went kind of normal.

was confused, because I thought it was [pronounced] P-S-Y. So I was like, ‘Who’s Psy?’ But so we went up, and Chris was like, ‘Hello, I’m from the band Coldplay,’ and Psy did not seem to know [him].

Later, Paltrow confirmed that her nether region hairs had to be chainsawed back at the last minute at the Iron Man 3 premiere because Pam Grier’s afro tried to sue for infringement.

Basically, since I wasn’t wearing underwear with the dress, things weren’t tucked in properly. So they were like, ‘You need to shave it.’ So I said that to Ellen, and she was like, ‘Well, it was only on the sides,’ and I was like, ‘No, I’ve got a big seventies bush,’ but I was kidding. But it was all a disaster. And now I look like an 8-year-old girl.

All this talk of the Met Gala makes me feel inclined to include that extra amazing gif of Jennifer Lawrence plus Kelly Osbourne photobombing J-Lo’s ass and Robin Williams tweeting that Kim stole his look. 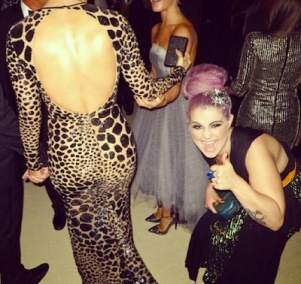 Read: Gwyneth Paltrow says ‘I’ve got crow’s feet’ and one breast is ‘sagging more than the other’