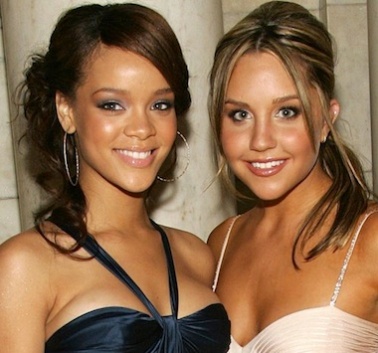 Amanda Bynes knows this has been a slow Memorial Day news Weekend and is stepping it up for the trainwreck-loving voyeurs. Following an arrest for tossing a lovely multi chamber glass “vase” out the window and claiming a cop “slapped” her vagina, appearance-obsessed Bynes decided to attack Rihanna on Twitter.

“@Rihanna you look so ugly tryin to be white,” she wrote, and deleted. Ten minutes later, she represented Team ignoramus Breezy with a “Chris Brown beat you because you’re not pretty enough,” adding that she almost named her new dog Rihanna.

We can only assume that the cheery-chipmunk-turned-amateur-porn-star with no movies and plenty of electroshock therapy in her future is jealous of Rihanna’s past relationship with Drake.

Rihanna, never one to ignore a direct tweet, calmly pressed a lit joint into Amanda’s skin with this zinger:

Ya see what happens when they cancel Intervention?

Unlike ur fugly faced self I don’t do drugs!” “U need the intervention dog! I met ur ugly face in person! U aren’t pretty u know it!

Does Amanda Bynes have a pastor father she’s trying to piss off? Does anybody have insight?