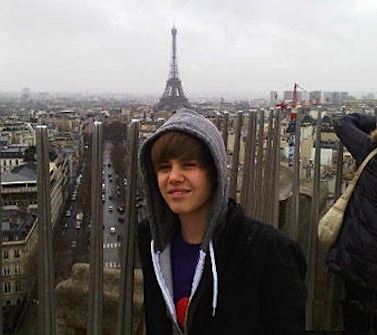 Justin Bieber has a new baby mama, except this one is better/more scandalous because she’s older, from a different country and claims Justin was 15 (instead of 16) when she slept with him. Like baby mama #1, Mariah Yeater, the new woman makes Justin out be the predator even though the state he supposedly diddled her in has pretty strict statutory rape laws.

The 25-year-old European floozy says she met JB in Miami Beach, FL in 2010 during his My World tour. The night allegedly began with sexy Mozzarella Sticks at TGI Friday’s and ended with some rawdogging at at The Perry South Beach Hotel (formerly known as the Gansevoort).

Here she is, two and a half years later, sitting with her screaming toddler daughter seeking fame and fortune (which confuses me, because she refuses to identify herself).

From Star Magazine via The Hollywood Gossip:

“In my opinion, [the toddler] does look a lot like Justin did at that same age,” the magazine’s anonymous source hilariously adds.

Unlike Mariah Yeater, who sued Bieber for paternity of her baby in 2011 and who was eventually proven to be a total liar, this woman is apparently not asking for a thing from the star.

“She’s going to leave it up to Justin to decide, at any point in the future that he chooses, if he ever wants to get involved with the child.”

Click HERE for In Touch’s exclusive kissing photos and screenshots of text messages they exchanged.

The next woman who comes out with one of these stories is going to have to say she had sex with Justin before he was even born so Selena Gomez can be their lovechild.