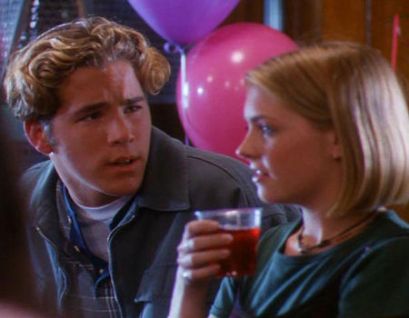 Back when Melissa Joan Hart was 19, she filmed a Sabrina The Teenage Witch movie for Showtime that co-starred a less chiseled and more curly-haired 17-year-old Ryan Reynolds.

Joan Hart tells Chelsea Lately guest host Ross Matthews that Ryan, who had a “creepy scene” in the 1996 movie where he “practically” tried to rape her, gave her a fancy Beluga watch after a few weeks of hanging out, flirting and camping.

“He like, threw this box at me and basically walked out of my dressing room, and I kind of stopped his car, it was very dramatic,“ she told Matthews. “I was in the headlights and I was like ‘Stop!’ ‘Cause I opened the box and it was like a Beluga watch, like a gorgeous watch … I stopped his car and I walked around the car and I wasn’t sure if I was going to get mad at him and I just grabbed him and started kissing him.”

“You get a piece of jewelry like that and you gotta make out with the guy,” she added.

So she kissed a minor when she happened to have a boyfriend. It’s Ryan Reynolds. Even as an underdeveloped, jean jacket-wearing Brian Littrell wannabe he’s a 10.

Melissa also discusses the steamy encounter in her new book, Melissa Explains it All: Tales from My Abnormally Normal Life, available for purchase in October.