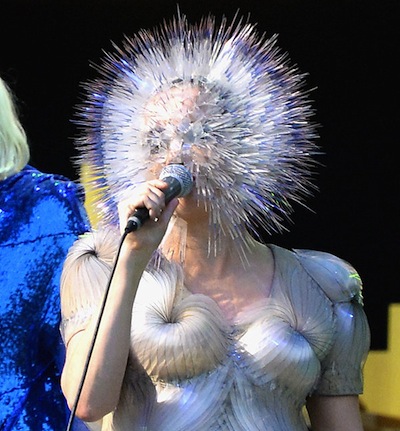 Long before Lady Gaga shattered her first mirror and glued it to her bra, the rare Icelandic yeti known as Bjork was roaming red carpets in dead swans and making arty naked music videos for songs with titles envied by Alien era Ridley Scott and Hitchhiker’s Guide era Douglas Adams.

Speaking of nudity, Bonnaroo concludes later tonight, and Crave Online listed Bjork as Saturday’s “Best Performance” at the festival. I’m sure it was lovely and weird and transformative, but it’s hard to notice anything but her outfit, clearly the result of Pinhead mounting an oyster.

I did not have sexual relations with that seafood.