Retired Jordan-era Chicago Bull Scottie Pippen was thought to have been arrested on Sunday for assaulting an autograph-seeking fan in a Malibu restaurant, but he wasn’t handcuffed or charged for breaking the man’s teeth and injuring nearly every part of his body including his back, which isn’t even news. (Slow day.)

I haven’t heard anything about Pippen, who won six NBA titles with the Bulls, in forever.

If you look at the “personal” section of his Wikipedia page, there’s nothing but a yard sale from 2011 and something about his wife being on Real Housewives of Miami.

Not that he needs to assault people to become interesting. Living in a sinkhole just crouching over his rings like Gollum until Kobe falls in there and pulls a Bilbo Baggins on his ass seems like a viable option.

TMZ reports that Pippen came out of the sinkhole to have dinner with his family when an overly aggressive fan called him the n-word, spit on his daughter and shoved him.

If that’s true, I completely condone the ass-whooping. Below is a photo of the so-called “victim…” 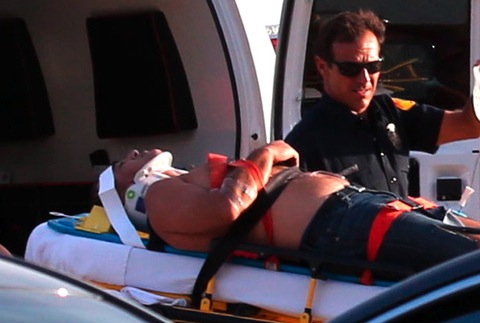 He actually doesn’t look nearly beat-up enough. I mean IF the spitting and n-word thing is true.