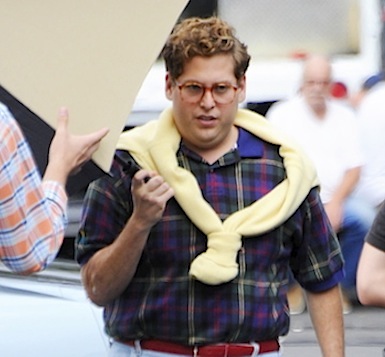 Former plump actor and current regular actor Jonah Hill has apparently received some kind words from legendary director Martin Scorsese about his recent arrival into more “respectable” roles, and justifiably bragged about it in a recent interview with Bullett Magazine.

“You can dis me all you want on a blog, or write whatever you want in this magazine and I’ll just be like, ‘Whatever, man. Scorsese thinks I’m awesome.’ He hired me and didn’t fire me, so I can kind of not care now. It really did give me personal assurance that I’m doing the right thing and that I’m talented in certain ways because he’s so important to me.”

Alright, so he sounds a little arrogant–but I don’t hate it.  Over the last few years he’s proven himself a legitimate actor, landing roles from successful music-biz man and professional babysitter in Get Him to the Greek, to the young, A’s assistant GM in Moneyball (for which he was nominated an Academy Award), to the nerdy half of the undercover cop duo in 21 Jump Street.

But come on, we’ll always remember him as the fat, desperate, foul-mouthed asshole in Superbad.  I mean, I remember seeing that movie the day it came out–a critical turning point in America’s history.

The day every nerd fell in love with Emma Stone because she for some reason seemed approachable, even though she’s not.  Like really not.  The day we met our friend McLovin and watched him lose his virginity for a glorious two seconds (atta boy!).

The day “DTF” became a thing.  It really is a fantastic movie, and Jonah Hill absolutely nailed the role.  He’s no question a talented actor and I’m thrilled for his career, and the fact that he hasn’t become typecast as the “overweight funny guy.”

He will appear in Scorsese’s upcoming film The Wolf of Wall Street, the trailer for which looks pretty badass.

Keep it up, Jonah.