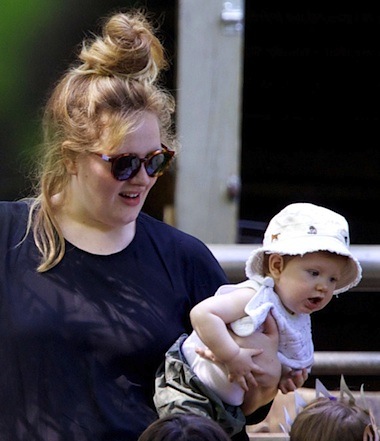 YES I’m avoiding talking about Jessica Simpson’s new baby Ace Knute, future best friend of Jason Lee’s son Pilot Inspektor, to discuss Adele and her son. This because non-talented, unintelligent Jessica seems like a Pez dispenser of children despite only having two and I’m just plain sick of reading about her and her protruding stomach.

Onto the beloved siren of the Southern England, second-in-command at the Order of Break-Up Anthem High Priestesses above Swift and below Morissette…

Mrs. Adkins, who does have the potential to become a sad log ride/dispenser since she once told Vogue UK “If I ever have children, I want five boys” (because girls don’t love their mothers and “can be so mean to each other”), recently took her son Angelo to drool, spit, poop, barf and cry in the general direction of polar bears and snow leopards at the zoo in Central Park, NYC.

He doesn’t seem particularly special besides being related to her, but I’m sure in coming years he’ll develop a lighting scar on his forehead, a devout following including a ginger kid (Ed Sheeran?) and a curly-haired know-it-all (Carrie Bradshaw?) plus the power to fully defeat Taylor and Alanis.

She also got another new tattoo. The very same one Lana Del Rey has on her hand with the very same word, Paradise, the name of Lana’s last EP. Not sure if ode to Lana or secret enemy takedown message.