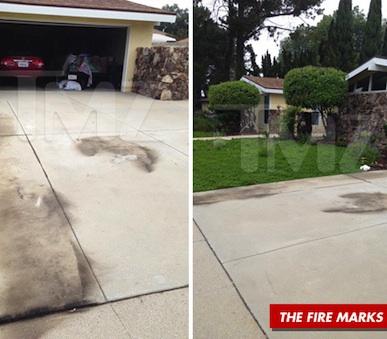 Every era has its great mystery. In the late 1800s there was Jack The Ripper, then much later, the Black Dahlia, Amelia Earhart and the Zodiac.

Now there’s Amanda Bynes, who is technically still alive but in worse shape than your average rat-eating, street-pooping hobo.

Last night she literally walked into some bitches’ driveway and started a fire. Seriously, TMZ has pictures of the very minimal damage.

Not so minimal is the damage the poor woman who owns the driveway suffered when she saw Amanda Bynes hunched over a lighter in front of her house making duck face and talking to herself.

Back to what I was saying about mysteries. Why was she lighting a fire? Was she cold? Does one of her personalities know she’s a witch and that flames usually kill them?

Was she always crazy or did she become crazy after she “retired” from acting? Was the crazy just lingering since forever and if so, what triggered it? What’s the cure?

I do know that I probably shouldn’t point and laugh at mental illness, it’s just so hard not to when she’s throwing bongs out of windows and not heeding Smokey the Bear’s warnings.

The police were called and Amanda is currently being evaluated by professionals at the hospital they sent Britney to when she shaved her head. She was seen just hours before the fire shopping at Bloomingdale’s with no pants on in her favorite blonde wig. Hope she found what she was looking for.

Scratch that. I only hope she finds she’s looking for if it’s not attention….