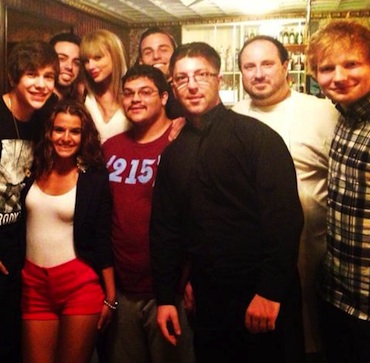 Taylor Swift isn’t like her “peers.” She’s not an insufferable little twat like Justin Bieber, she doesn’t do embarrassing shit like twerk with teddy bears (Miley) or appear to be suffering from yet-to-be-discovered vagina bugs like Vanessa Hudgens. Yeah she’s had a lot of boyfriends, but she’s also a good tipper.

So on top of having an arsenal of top 40 hits about her exes, Swifty throws money at waitresses and waiters like Kid Rock at a strip club.

After dining out in Philly with tour mates Ed Sheeran, Austin Mahone and others at the Italian restaurant Ralph’s, Taylor left a $500 tip on an $800 bill, which is a whopping 62%. AND she gave concert tickets to the head chef’s autistic son. And ate a plate of chicken Parmesan that was “almost as big as her,” according to the owner.

Are you really going to continue to badmouth a talented 23-year-old with the generosity and appetite of a hippo that just ate Gandhi and gained his powers?