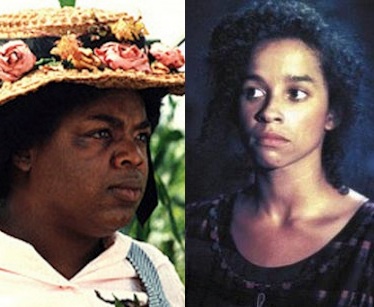 Tommy Chong’s daughter, Rae Dawn Chong, is one of those rare rude and ungrateful Canadians. I say this because Rae Dawn called her The Color Purple co-star Oprah an insecure “field ni**er” in an interview.

Basically Dawn Chong and Oprah used to sort of be friends and then RDC got super jealous of Oprah and decided to do what all emotional babies do and flip it around to sound like Oprah, the woman who lives on an island of wealth and throws cars and $2000 gift baskets at her audiences, was and is jealous of her.

I’m all for sh*t talking Oprah (“Biotch, you got a Twinkie problem”) a little but throwing the n-word into it isn’t exactly going to make me or anyone else want to jump in on your side.

Like, BITCH, you barely deserve a platform to even be speaking about Oprah in the first place.

You played Susan Sarandon’s love interest in Jeff Who Lives at Home and you starred in two big movies in 1985. That’s great and all but shut your face, be appreciative, and stop wishing you were Oprah.  It’s okay, none of us can be that rich.

Just be careful, because she can totally have you killed by one of her minions (Dr. Phil, Rachael Ray, Suze Orman, Deepak Chopra, Maya Angelou or a superteam combo of all five) before you can say “washed-up.”

3 thoughts on “Someone Called Oprah a ‘Field Ni**er,’ But Don’t Worry, They’ll Be Dead in a Few Days”