Can we can agree that best-current-female-MMA-fighter Ronda Rousey is a tough ass badass no nonsense bitch? Like whether that personally translates to you as a good or bad thing, you have to recognize that she could kick your ass while making a latte and checking her Twitter and not break a sweat.

Here she is telling off a reporter for asking her how many times she bangs before a fight. It’s a variation of a question she gets asked all the time. Now, he may have asked because she has, in various interviews, described how sex is a great way to let off steam prior to a match, but that still doesn’t make it “okay.”

Overall he just sounds like a pervert who really needed to be put in his place and she was obliged to help him with that. Hey guy, you’re a far cry from Bob Costas or Bryant Gumbel. STFU. 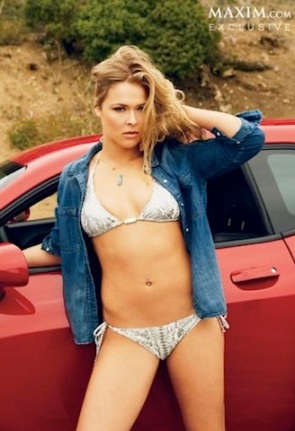 Here she is on the cover of Maxim’s September issue, still not answering your stupid question.