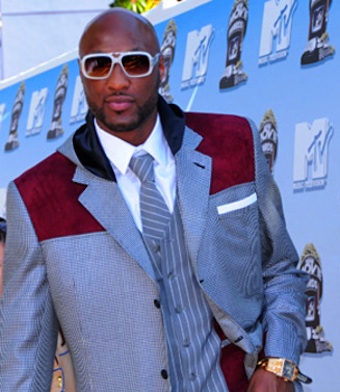 After years of tabloids throwing random darts at the board, they finally landed one on Khloe Kardashian and Lamar Odom. Instead of an affair, it’s a drug problem.

It’s being reported that the former Lakers forward has been missing for the past two days and is on a suspected crack binge after the Kardashians attempted an intervention. God I hope Kanye wasn’t there. “Hey dog, I’m sorry you like drugs, but my new song “Bound 2″ is one of the best singles of all time! Download it if your hands aren’t shaking too bad, k?”

In 2011, Lamar spoke of the heroin addiction that plagued his father, Joe.

“I witnessed things that a 10-year-old definitely wasn’t supposed to see,” Odom said during an episode of Khloe and Lamar. “It’s hard for me to speak up on it and get it through to Khloe because she grew up so different.”

Really hard to sit here and listen to people talk shit about my family! Fuck you and shame on you! I'm too protective for this shit!

His mom died when he was 12, leaving him with the unstable father figure, so it’s pretty fucking impressive to me that he became a massive basketball star but sadly not terribly surprising that he turned to drugs.

Here’s a video of him and his teammates discussing his other addiction, to sugar. As in, somebody slap those rocks out of his hand and replace them with some Pop Rocks already.

Do you have any idea how hard it is to play basketball on narcotics?