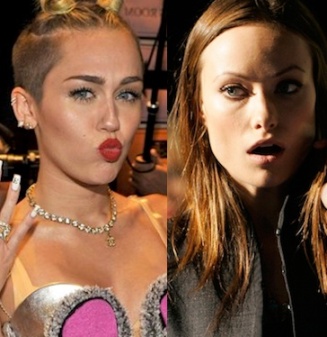 You know how I feel about twerking. It’s awesome when the one woman goes to Wal-Mart and makes a “twerking by the cakes” video, but if anyone ever says that Miley killed at the VMAs, they’d be referring to the death of the twerk.

Cat eye Drinking Buddies vixen Olivia Wilde had this to say during a Reddit Q&A, after being asked what she would do if she could go back in time and witness any historical event:

“The burning of Joan of Arc. I’d grab her and run and tell her that in the future Miley Cyrus is our saint and Joan must learn the art of twerking.”

Bahahaha. People tend to forget that she’s actually funny when they look at her face, but this is the woman who once said “In a thousand years archeologists will dig up tanning beds and think we fried people as punishment.”

Then there’s her amazing online encounter with Justin Bieber fans. Good in my book.