James Franco wants you to consider some shit. Specifically, he wants your vote for Best Supporting Actor in the next round of Academy Awards.

The recently-roasted actor is featured in a “For Your Consideration” poster holding an Oscar in each hand, with the caption “Consider This Sh*t” at the bottom, a reference to his Riff Raffy Spring Breakers character Alien. It’s one of James Franco’s most interesting and fuckin’ weird roles, but it was lauded by critics as one of his best, and an Oscar nom is certainly not outside the realm of possibility.

The film tells the story of four college whores who rob a bank and use the money to head down to St. Petersburg, FL for the trashiest spring break in history.

In addition to a ton of awesome, nostalgia-inducing partying, the girls eventually meet Alien and get pulled into his gangster life of drug and weapon distribution.

For those who haven’t seen it, it’s an acid trip of a movie, complete with Selena Gomez smoking weed, large, bouncing boobies, and weird colors. 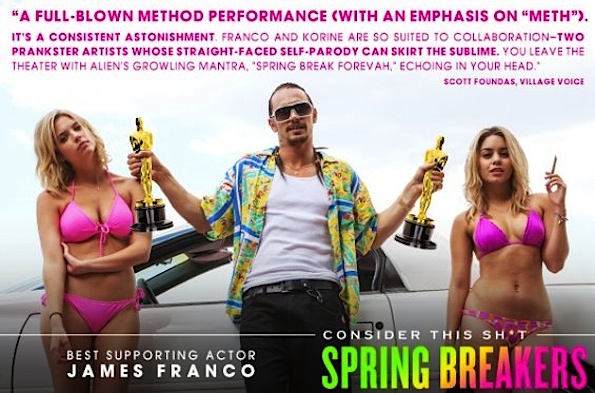 I certainly didn’t think it was perfect, but it was definitely entertaining in its own way. If you like watching hot college girls party, take their tops off, and fall into a gang with James Franco then motherfucker, you will enjoy this movie. And Franco’s character is a win. Consider it.