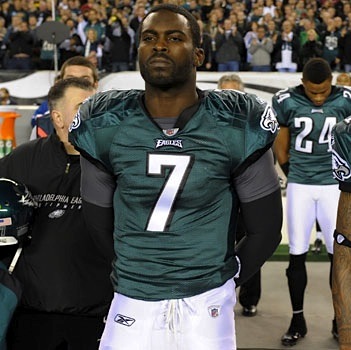 The Chris Brown of football (I would say Kanye West if Kanye had overseen the eletrocution of Kylie and Kendall Jenner) got on Twitter and pressed enter without thinking, which is no surprise considering his ball-throwing accuracy and failure to form words without deserving an armbar from Ronda Rousey’s mom.  (Or any mom.)

Vick’s tweet in question read “we will redeem ourself,” in regards to the Eagles last two losses to the Chargers and Chiefs and their upcoming game against Denver which I at first thought was a mistake, but I now realize is just his way of saying that he IS the Eagles.

Have you not heard that Michael Vick doesn’t require air to breathe, but is instead fueled by the angered souls of pitbull ghosts that won’t allow Philly to make it to the playoffs as long as he’s QB? Jokes on him because we will redeem ourselves WHEN HE’S GONE.

We will redeem ourself