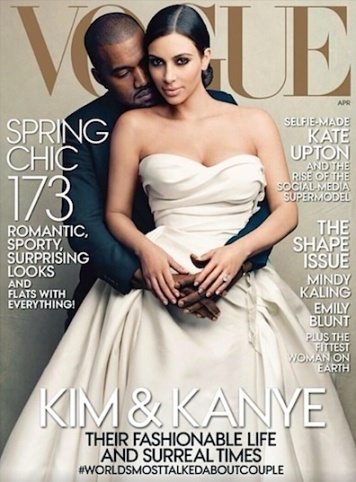 Turns out, Anna Wintour isn’t opposed to Kim Kardashian, or hashtags (the latest cover of Vogue features both). Or maybe the magazine’s bloodmother just likes money as much as Kim and the rest of the Kardashians.

Her and her perfect mate, the male version of her in terms of credit limit and ego size, Kanye West, are featured in the issue after more than a year of whispers that Wintour would never allow a woman who contributes so little to society the satisfaction of gracing the cover.

To be fair, Vogue is all about fashion, and her and Kanye are pivotal figures during fashion week and any stylish red carpet event the pair end up invited to. Co-owner of Dash and the Kardashian Kollection line that appears in stores that her and her sisters would never shop at, Kim probably does “deserve” to be recognized in this capacity.

We’ve come a long, sad way from the days when people like Audrey Hepburn, the epitome of class, were hot off the press. Alas, Kim Kardashian is inarguably the least talented person that this honor has been bestowed on, but at least she’s no Rebecca Black.

2 thoughts on “Does Kim Kardashian ‘Deserve’ to be on Vogue?”