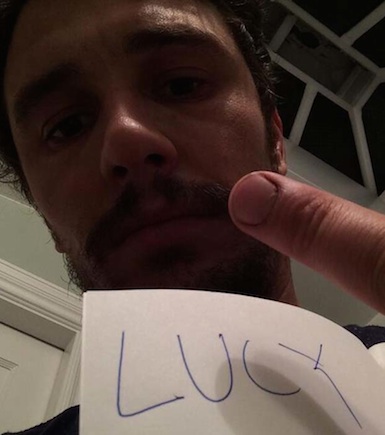 In what is very likely an elaborate and bizarre scheme to promote an upcoming movie starring Emma Roberts, James Franco seemingly attempted to meet up with an underage Scottish girl named Lucy on Instagram.

A number of websites wrote about the scandal after the 17-year-old posted their conversation (Franco asking questions like “Do you have a bf?” “When is your bday” and “What’s your #?) on Imgur.

The girl was either in on it too or wasn’t and he had simply counted on her tattling to the news.

Palto Alto, out May 9, is reportedly about a high school teacher who has an affair with a teen soccer player. Check out the trailer HERE.

I'M NOT! I HOPE PARENTS KEEP THEIR TEENS AWAY FROM ME. Thank you http://t.co/I1d4n3yVe0