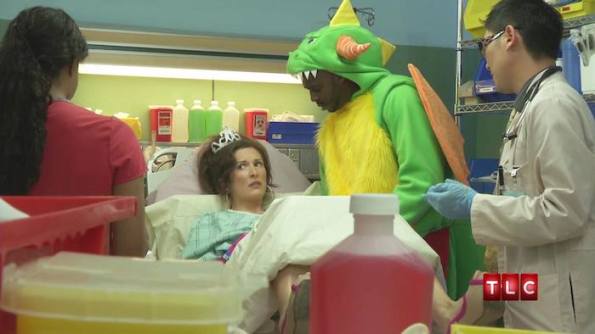 At first the couple pretended not to know what was wrong hoping the doctor would find through an exam. Whenever something bad happens to me that I’m embarrassed about, I think “it can be worse.”

I assume the only thing worse then keys in the front would be keys in the back (double ouch). The woman decided to come clean when the doctor still didn’t see anything wrong.

The doctor examining Michelle did a probe and discovered the key was next to her cervix and was tangled in the nylon removal strings of her IUD. An IUD is a device inserted into the uterus to prevent pregnancy. The doctor was worried that untangling the key from the IUD strings might remove the device. I think removing the IUD is not a bad idea considering there is a key in tangled in it…

Emergency room physician Dr. Michelle Pearl  was not the doctor for the couple but she is there for the input on the show. “The fact that this key got entangled in these strings is so random, so unbelievable,” she said. “I can’t believe it actually happened.” She also had this to say: “I’d obviously never recommend anyone do anything like this even if your judgment is impaired in the moment of passion.”

So there you have it kids. Don’t stick foreign objects in your vagina/anus even if things are getting hot and heavy. Check out Sex Sent Me to the E.R for some good laughs.

One thought on “Why Do People Put Things There?: A Question Not Even ‘Sex Sent Me to the E.R.’ Can Answer”