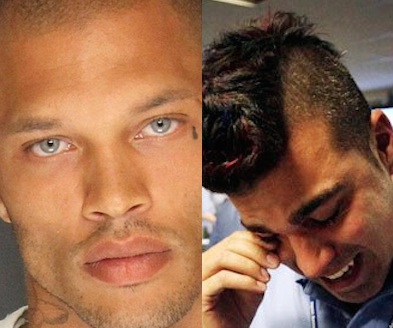 Rewind to summer of 2012, when NASA engineer Bobak Ferdowsi a.k.a. “mohawk guy” stole not only our hearts but our minds during the Mars Rover landing. Same unexplainable phenom, very different men…

Sadly I think 80% of women would rather be “robbed and assaulted” by sexy mugshot guy and his gunrunning ways than let Mohawk Guy explore their forbidden planets.

Has the human race fallen so far in just two short years? Leave the weeping to the three other men arrested alongside Meeks – Joelin Coleman, Terry Bailey and Joelin Coleman – whose crime spotlight was shamelessly stolen by American’s Next Top Felon.