“I have never f*cked one of my friends. Once I see you in that way, it doesn’t happen,” she said. “But we do f*ck and it’s crazy.” (See Haze’s adorably grumpy morning face? That’s how she f*cking feels about you f*cking calling that chick in her f*cking lap her bestie.)

Crystal clear + third cutest lesbian couple since Leisha Hailey and Camila Grey after my girlfriend and I (obviously) + wow that’s a giant plate of pancakes. 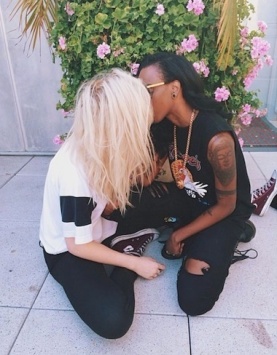 Damn, anyone else seeing that Ireland is Ellie Goulding’s side profile twinsie?

One thought on “Angel Haze is WAY More Than Friends With Ireland Baldwin, Get it Right”