Last week, wittle baby Justin Bieber climbed up on a big bad four wheeler and hurt his itsy bitsy wrist. Did I mention he was arrested, or that Selena Gomez was there?

A photographer in a minivan reportedly caused the ATV crash in Ontario, but it’s more probable that he sprained his wrist texting, shaking his fist at the paparazzo he got in a fight with or whacking off to pictures of himself.

The weirdest part is that noted lawyer Gloria Allred is getting involved, and at first I thought she was repping Bieber (which would make sense since she’s all about protecting women’s rights), but she’s on team paparazzi, looking to imprison the Biebs in rusty shackles somewhere comparable to where Bane sent Batman, I hope. 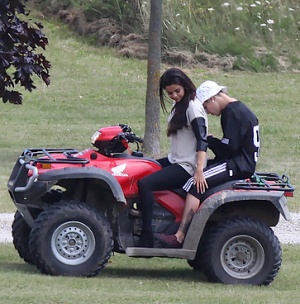 Selena and Justin would both probably marry Taylor Swift in between their marriages to each other for added scandal/tabloid fodder.