It’s been two days since Joan Rivers passed away at the age of 81 after complications during surgery. After a week of crossing our fingers hoping that Joan might pull through, daughter and noted business partner, Melissa Rivers, was faced with the decision of taking her off life support.

A multitude of celebrities have shared an outpouring of supportive messages and stories about Joan, like Giuliana Rancic, who called her “The funniest woman” ever, adding that “She could put a smile on your face, instantly, no matter how hard your day was.”

So true, what better way to escape reality than listen to Joan Rivers insult people? I’m not being facetious, insult comedy is the best comedy. Anyone who says otherwise is Bill Cosby. And, not only was she a comedian, but an actress (who could forget her as the voice of the cockblocking robot Dot Matrix in Spaceballs?), an author and a Late Night host.

Joan was the female, television-version of Howard Stern, versatile as f*ck and completely unafraid to speak her mind and ask real questions. (A quality that almost got her blackballed from Hollywood.) I saw the most of Joan on E!’s Fashion Police, as a sanctioned truth-teller and critic of all things offensive to the eyes.

She was absolutely prolific at making fun of celebrities and would never hesitate to command guests like Ryan Lochte to STFU and take off his clothes, or to let Taylor Momsen sit in her lap. Best of all, no one was off limits.

Joan would literally badmouth anyone and everyone. The reactions her jokes inspired became a test of who did and didn’t have a stick up their ass.

Here’s what she told her daughter after she entered surgery in 2012, in case of the worst:

If anything happens, Melissa, I’ve had a great life. If I died this morning, nobody would say ‘so young.’ I’ve had an amazing life, if it ended right now – amazing life!

You’ve been just great and you’ve come through so much, and how lucky we are. I love you so much.

Makes you feel a little bit better, doesn’t it? Here are some random Joan moments to add to the road-to-feeling-better-about-the-death-of-a-legend pile:

Sarah Silverman explaining to Jimmy Kimmel how she tuned into Fashion Police every Friday because Joan told the most “hardcore jokes” on TV. 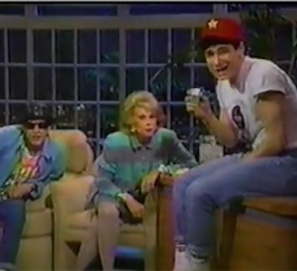 Like Robin Williams, she never had to work at being funny. She just was.

2 thoughts on “From Dot Matrix to ‘Fashion Police’: Why Joan Rivers Was the Best of Her Kind”