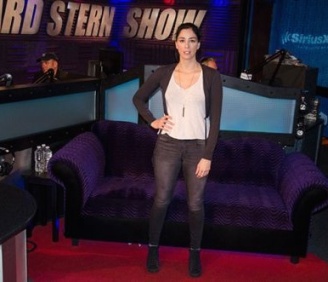 After listening to Sarah Silverman on Howard Stern for the zillionth time, I’m realizing that the woman famous for lines like “I don’t care if you think I’m racist, I just want you to think I’m thin,” is not only hilarious, but also kind of on the top of my previously non-existent list of celebrities I’d actually want to spend time with.

On the Stern Show (September 23), real role model and imaginary bestie Silverman managed to transform stories on superficial things like dating Michael Sheen, showering under her mother’s bush and vape pens into hilarious well-worded wisdom on aging and body image.

On her infamous, random Emmys speech:

I’m always obsessed with the thought that we are hurling through space right now.

I’m in training for the rest of my life to be able to walk without pain. I just want to be healthy.

My skin is the loosest it’s ever been, and it’s only gonna get looser.

Her scene in Masters of Sex, starring boyfriend Michael Sheen:

Ever since I turned 40 I’ve been naked in things. It’s just a human body and I just kind of am over it.

You know what, it’s more like ‘Oh my God, look at all these beautiful women and he loves ME.

He and Kate are like brother and sister. I love her, she’s hilarious.

People made a really big deal about it, and I feel like in a few years it won’t be a big deal. Listen, I think of myself as a stoner but the truth is, I’m a total lightweight. I’ll have a puff or two puffs at the end of the night and it’s so funny that’s such a big deal because I’m literally milling around with drunk terrifying people. Drunk people are so scary to me. I don’t even want to make eye contact with them, it’s trouble. They’re trouble. If you look at them the wrong way all their fears come to the surface. You know when drunk people go ‘Oh you think you’re better than me?’ and it’s like, ‘No, that’s what you feel and it’s coming out,’ you know?

The benefits of using a vape pen:

Edible pot is a real commitment, you don’t know how long it’s gonna last, and I don’t like doing that casually. If I know I have nothing the next day, but this is great, I can just take a little puff and I just feel it’s like having a glass of wine or something. I don’t drink because the taste is terrible to me, I think I have a 10-year-old’s palate.

There’s no smoke in your lungs, it’s just vapor. That said, you plug it into a wall, and who knows. We won’t know for ten years what it does. I’ll probably have a second head growing inside of me.

Her bit on showering with her mother as a child in her HBO special, We Are Miracles:

“That would be like my  faucet. The water that would come out from her ample [bush]… that would be what I would shower with. It was like my own little curly shower.”

My whole life I’ve been like, ‘I’m not ready, I’m not ready. I love kids, but someday.’ And now it’s like, I’m 43 and I still don’t feel ready. It’s such a huge decision. How do people make this decision so fast like it’s nothing? It’s your whole life! My plan has always been to be like young grandma age and adopt a kid at 50, and that’s why I want to be in really good shape and strong. I still have seven years, but I don’t know. Maybe it’s not for me.