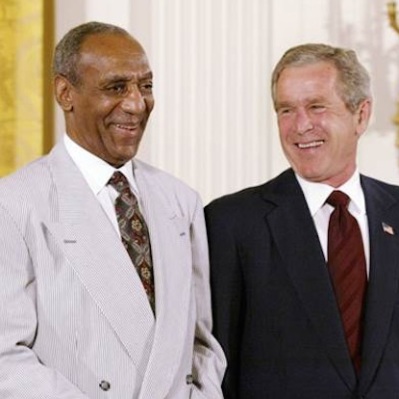 Bill Cosby’s name is on the tip of everyone’s tongues lately for being the unwanted tongue at the tip of pretty much every woman he ever came in contact with, and we’re all sick of his freedom. Even Whoopi Goldberg, who has famously, stubbornly defended horrible people like Michael Vick and Roman Polanski thinks Cosby should be punished.

The latest person to speak out against Cosby is the king of America, President Obama, who sadly doesn’t have to power to revoke a presidential medal Cosby received in 2002, let alone to speed up the process of him getting DP’d by pudding pops in a federal penitentiary.

“I’ll say this. If you give a woman — or a man, for that matter — without his or her knowledge a drug, and then have sex with that person without consent, that’s rape,” Obama said during a White House press conference. “I think this country, any civilized country, should have no tolerance for rape.”

Camille Cosby, the blind eye turning idiot wife, has apparently convinced herself that every single one of her husband’s accusers consented to this particular brand of drugs and sex. I may be from a different generation, but I have yet to see a single girl, even the partiest of all party girls, jonesing for sedatives. “God, I wish a guy I barely know would take me up to his hotel room and give me a pill that will paralyze me,” are also words I have never, and will never hear.

Screw Camille for actually suggesting that Quaaludes are 45 different women’s drug of choice. Look up “feminist” in the dictionary and you will find a picture of a million people flipping her off for stepping out of his shadow just long enough to set us back 100 years.

3 thoughts on “Obama Has No Tolerance For Bill Cosby”