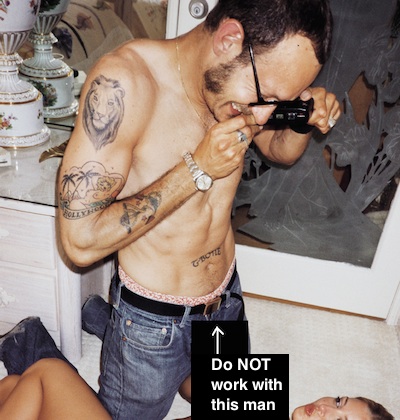 There is no question that famed photographer Terry Richardson is a pervert. He’d actually be the first one to tell you so and shrug it off, but it’s beyond troubling how many big names (Lady Gaga, Jared Leto, Kate Moss) continue to work with him considering the recent allegations against him.

Confirmation that his form of perverseness translates directly to manipulation and sexual exploitation has appeared in confession form by girls on Reddit and Jezebel.

You can see a direct timeline of it all on Styleite, but the events described by Charlotte Waters summarize the extent of this best. According to Waters – who was 19 at the time – Richardson instructed her to take off all her clothes and proceeded to lick her ass, kiss her aggressively and request that she squeeze his balls until they “pushed back up into his body.”  END_OF_DOCUMENT_TOKEN_TO_BE_REPLACED