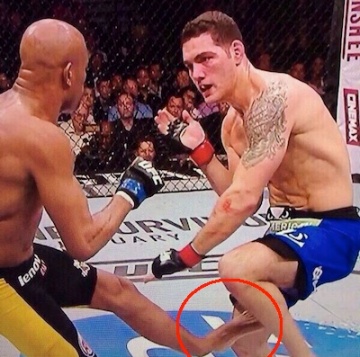 UFC 168 just concluded with overconfident bastard Anderson Silva breaking his leg after an attempted kick on Chris Weidman in their much-anticipated rematch.

Miesha Tate also made history by taking Ronda Rousey to the third round.

Sad day for Taterade drinkers, she still lost to a vicious armbar after squirming out of several dangerous ground situations like Houdini, but with braids and a shovelface.

Back to Silva… During the second round, Silva raised his leg in an attempt to thwack Weidman, which seemed like nothing until he fell on the ground screaming and a replay showed his leg completely bending away from his ankle.

It is unlikely that Silva will ever fight again, as the recovery rate on this kind of injury is zilch point one.

END_OF_DOCUMENT_TOKEN_TO_BE_REPLACED

While it was weird that he hunched over after one light hit prior to the knockout and just plain stupid how much he seemed to underestimate and not respect his opponent, his eyes did “just roll back into his head,” as Dana White put it. Seems like a hard thing to fake. Maybe?  END_OF_DOCUMENT_TOKEN_TO_BE_REPLACED