Those who are confused by anyone in support of proposing stricter gun control laws have one memorably nonsensical thing to say: “give everyone a gun and we’ll be safe, dagnabbit!”

Like Ted Nugent, singer of “Funk U,” and notorious collector of animal skins and camouflage cowboy hats. On Twitter, he writes:

“We pray for all victims&loved ones of demonshooter in CO& we SALUTE the brave warriors who saved lives IF only they would hav had a good gun.”

He also defends James Holmes’ right to have an assault rifle by denying its existence. “There were no assault weapons used in the CO shooting only universally proven sporting & self defense firearms & 6k rounds aint squat. lies.”  END_OF_DOCUMENT_TOKEN_TO_BE_REPLACED 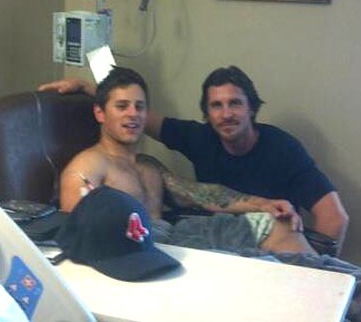 Christian Bale popped up unannounced to visit five victims of The Dark Knight Rises shooting at the Medical Center of Aurora on Tuesday, all sweet and low-key in jeans and a t-shirt.

He spent two and a half hours at the facility, and snapped photos with several of the victims and some of the employees as well. One, Carey Rottman (left) posted the photo on Facebook.

“The patients were really happy to meet Bale,” hospital president Bill Voloch told reporters. “They are obviously big fans of his movies. They wanted to see Batman and were really pleased to see Bale.”

END_OF_DOCUMENT_TOKEN_TO_BE_REPLACED 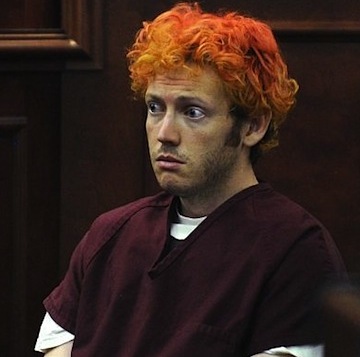 You didn’t realize it after you heard about the 71 victims? I mean what details did you need to come to that conclusion besides the bare bones of the story?  He had guns and tear gas. He killed people. Of course he’s disturbed.

On top the obvious – calling himself “The Joker” and reportedly spitting all over his solitary confinement cell – you can see it in his face during his first court appearance.  END_OF_DOCUMENT_TOKEN_TO_BE_REPLACED

I have now written four articles relating to the Colorado shooting at a midnight showing of The Dark Knight Rises. It’s a sad and memorable story and perhaps more frightening to some because it is so easy to relate to.

We all go to the movies, and in terms of popularity, Batman is as much of a craze as Twilight or Harry Potter and has a longer history in film, TV, and comic book form.  END_OF_DOCUMENT_TOKEN_TO_BE_REPLACED

Christopher Nolan released a statement through his publicist in L.A. (he’s a dual citizen of the UK and U.S.) addressing the shooting in Colorado that happened during a showing of his movie, The Dark Knight Rises. The gunman, who reportedly referred to himself as “The Joker” to the police after his arrest, opened fire on a theater that was a mere 21 miles from Columbine high school. Nolan wrote:

“Speaking on behalf of the cast and crew of ‘The Dark Knight Rises,’ I would like to express our profound sorrow at the senseless tragedy that has befallen the entire Aurora community. I would not presume to know anything about the victims of the shooting but that they were there last night to watch a movie.  END_OF_DOCUMENT_TOKEN_TO_BE_REPLACED

Almost everyone who considered going, or did go to a midnight showing of Batman this morning just experienced a spine-tingling moment of silence and selfish relief.

At around 12:30 a.m., a 24-year-old UC Denver student wearing ballistic armor and a gas mask named James Eagan Holmes brought a machine gun to a Century theater in Colorado and killed 12.

Over fifty of the people in the Denver suburb of Aurora were injured, mostly from gunshot wounds, though some suffered chemical burns from what the police called a “smoke device.”  END_OF_DOCUMENT_TOKEN_TO_BE_REPLACED