Thanks to Starbucks’ Gold Card program and the natural human urge to break inane records, a man in Dallas created a specialized $54 cup of coffee that was literally served in a vase.

The drink, labelled the “Sexagintuple Vanilla Bean Mocha Frappuccino,” beat the previous record for Most Expensive drink ordered at the franchise by about six dollars and 70 cents.

With 60 shots, around 2,000 calories, and extras like drizzles and protein powder, the sex-a-whatever Frappe has enough caffeine to hype up a pod of blue whales, and/or Honey Boo Boo’s entire family.

END_OF_DOCUMENT_TOKEN_TO_BE_REPLACED 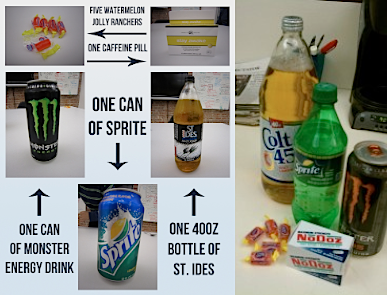 Four Loko, the caffeinated malt beverage sometimes known as “Blackout In A Can,” was recalled after one student at CWU nearly died and several others became so intoxicated that investigators thought they overdosed on hardcore drugs.

Once put back on the shelves, the drink was modified to no longer include caffeine, guarana and taurine, three of the drink’s “four” ingredients, the fourth being alcohol.

A few weeks before the original Phusion Projects item was removed from stores, young enthusiasts nationwide began grabbing the stuff by the armful to sell on Ebay and Craigslist for nearly $20.00 a can.