For those looking to fill the void left by Pacific Rim, there’s a new Godzilla coming in spring of 2014.

It also stars Bryan Cranston, Elizabeth Olsen, Ken Watanabe, Juliette Binoche and Kickass’ Aaron Taylor-Johnson, who is scooping up roles Shia LaBeouf would have been offered years ago, before he became a dreadlock-having piece of penis-flashing performance art. 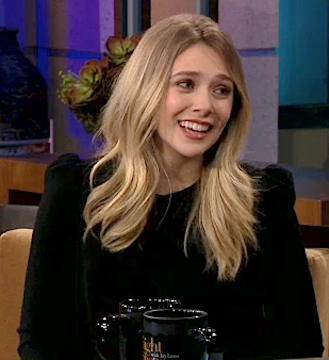 In case you were still on the fence about Elizabeth Olsen being some ethereal, talented actress with Maggie Gyllenhaal-like plates for eyes that is in no way like her sisters, Mary-Kate and Ashley, I assure you, it’s all true.

During a visit to the Jay Leno’s Tonight Show she casually mentioned baking her own cake and going pan-shopping at Williams Sonoma for her 23rd birthday.

Other hints that she may be very down to earth (P.S. Lana Del Rey is too, dumbasses) are as follows:

1. She talks openly about moving often at a young age because of “water damage and mold issues” and “really bad luck.”
END_OF_DOCUMENT_TOKEN_TO_BE_REPLACED

Mary-Kate and Ashley Olsen grace the cover of Vogue’s best dressed special edition. Mark Holgate, Vogue Fashion News Director and editor of this particular issue called the decision to label them the most stylish sisters a “no brainer.”

Well, Mark Holgate, I don’t agree. Besides, there are no other celebrity sisters besides the Kardashians, who I happen to like better since they don’t take themselves seriously.

This cover is borderline incest-y AND missing the third and newly relevant younger Olsen sis, Elizabeth, who has filmed six movies within two years. By way of common sense, you have to figure that at least two of those movies are going to be legitimate.

END_OF_DOCUMENT_TOKEN_TO_BE_REPLACED

How many people even knew there was a third Olsen let alone one who actually shows promise as an actress? Her name is Elizabeth Olsen, or “Lizzie,” as she goes by. She’s 22 and will most likely be nominated for an Oscar.

People are calling her new movie Martha Marcy May Marlene the next Winter’s Bone, calling her a younger version of Vera Farmiga. She has six movies, yes six, coming out between now and the end of 2012, with more on the horizon.

Lizzy’s sisters were front-and-center in the fame spotlight for around a decade, famous for  Full House, New York Minute, a juvenile clothing line, a creepy year-long countdown to their 18th birthday, and one overblown eating disorder…