The best way to watch the new Cheerios commercial is without knowledge of the so-called controversy surrounding it. If you’re a reasonably educated liberal, the ad serves as an example of how far we’ve come since the mid 1960s, when interracial marriage was illegal in deep-south states like Mississippi and Georgia. You may not even notice that the parents are not the same color.

Many people who did notice were probably reminded of the hundreds of commercials featuring non-biracial Asian, black, white and Hispanic couples (plus silly, overly inclusive Army and college brochures) and found it refreshing. “It’s about time” seems like an appropriate thought.

Sadly, this country is full of moron bigots who love to hate people who are different and/or happier.

END_OF_DOCUMENT_TOKEN_TO_BE_REPLACED 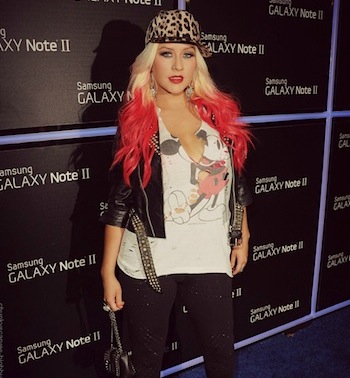 During a film and TV conference, Christina Aguilera made a biting comment about the internet’s opinion of her.

“Now everyone is a critic. I don’t read blogs. It’s just God-knows-who in Buttfuck, wherever writing hate shit,” Aguilera said. “You can’t take it seriously. I’m sure you’ve all been hated on at some point by buttfuck people.”

Now this is a Christina I can get on board with. Swearing up a storm, connecting favorite adult swears (“fuck”) with words that make children laugh (“butt”) and throwing a “shit” in for good measure.  END_OF_DOCUMENT_TOKEN_TO_BE_REPLACED

Paula Deen talked to both People and AP about the public’s reaction to her being diagnosed with Type 2 diabetes, mentioning “hate” both times.

To People: “I was surprised by the depth of hate, this is not something I chose. I had been given lemons and I had to try to make lemonade – without sugar!”

To Associated Press: “I think a few people who have access to a TV camera and ink kind of wanted to hate on me for coming down with something.”

I would never diss on Paula for having diabetes. I myself fear that I will one day contract it after touching one of my many pet bags of sugar.

When I first read that people were hating on her I thought she was saying it was because she was skinnier now (she’s lost 30 pounds, her goal is 45) and I’m angry because ‘Don’t Hate Me Because I’m Not Fat’ is a better title.  END_OF_DOCUMENT_TOKEN_TO_BE_REPLACED

In an interview with Vibe Magazine, rapper Lil’ Wayne expressed his views of the Tea Party, Republicans in general and Obama.

“You learn from what the right-wing is doing and you take something from it…I feel like as a people the most that we can do is better ourselves and learn. Then look at yourself and ask ‘Am I the person they’re talking about or am I not?’

“You have to make the most of who you are because the Republicans are never going to like us.”

END_OF_DOCUMENT_TOKEN_TO_BE_REPLACED


*
So I’m sitting on my couch writing on my laptop at 2:15 a.m. and watching Fuse’s All Nighter show, which is distant compared to the clicking of keys but still prevalent, and all of a sudden guess what I hear? The devil’s voice! Seeping out of my TV like cheap toothpaste. And he’s not what you’d think, his voice is high-pitched, and by no means as commanding as you’d expect the devil’s voice to be.

Then I tune my ears in to his voice, and I feel him hypnotizing me with some horrendous new form of torture. And what is that new form of torture? The one where blood comes pouring from my ear canal, and there can never be enough tissues or towels or doctors to stop the painful endless surge of tissue that is escaping my hemorrhaging brain…