The Chris Brown of football (I would say Kanye West if Kanye had overseen the eletrocution of Kylie and Kendall Jenner) got on Twitter and pressed enter without thinking, which is no surprise considering his ball-throwing accuracy and failure to form words without deserving an armbar from Ronda Rousey’s mom.  (Or any mom.)

Vick’s tweet in question read “we will redeem ourself,” in regards to the Eagles last two losses to the Chargers and Chiefs and their upcoming game against Denver which I at first thought was a mistake, but I now realize is just his way of saying that he IS the Eagles.  END_OF_DOCUMENT_TOKEN_TO_BE_REPLACED

Paula Deen is not only being fired from the Food Network, but also having her products “phased out” by Sears, Home Depot, QVC, Kmart and Walgreens for admitting that she has used the N-word in the past has me thinking about related celebrity scandals.

For instance, how bad is this when compared to comedians like Michael Richards using the N-word multiple times in a recorded stand-up show or Daniel Tosh making rape jokes at a heckler’s expense?

Then there’s Grey’s Anatomy star Isaiah Washington, perhaps the most similar to Paula Deen because the questionable word he was said to have uttered wasn’t caught on camera until he stupidly told a Golden Globes press room “No, I did not call T.R. [Knight, his Grey’s co-star] a f*ggot.”  END_OF_DOCUMENT_TOKEN_TO_BE_REPLACED 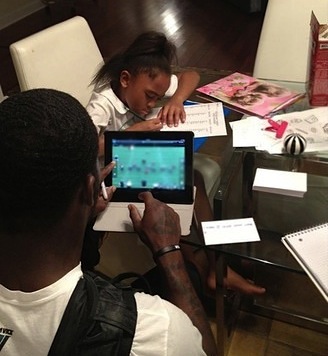 Eagles quarterback Michael Vick deleted a photo of his daughter doing her homework from Twitter after a radio host in Philly noticed that there was a box of dog treats on the table next to her.

Vick replaced the picture with a cropped version, sans Milk-Bones, but it’s too late. I can’t erase the image from my mind.

After serving just under two years and completing his probation for his involvement in a dogfighting ring in Virginia where he reportedly killed at least eight pit bulls, Vick is legally allowed to own a dog.

If you ask me, or most anybody else, the news of Michael Vick having a dog is much more disturbing than knowing that Chris Brown and Rihanna are dating (because she’s making a choice to do so).  END_OF_DOCUMENT_TOKEN_TO_BE_REPLACED 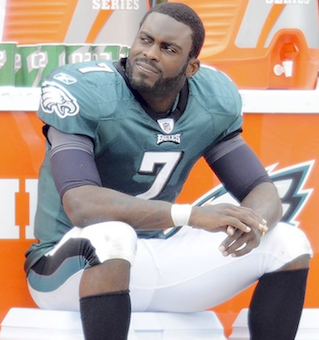 During a game against the New York Giants in Philadelphia, it was reported that Michael Vick broke his hand after what he claims was a late hit by Chris Canty.

The team physician for The Eagles determined the injury on Sunday during the game, but it was later ruled to be a severely bruised bone with problematic swelling.

As much as I love the Eagles I was really rooting for his hand to be broken, since I HATE him. Besides being a sadistic dog-killer, he complains too much…

END_OF_DOCUMENT_TOKEN_TO_BE_REPLACED

ESPN is reporting that the Philadelphia Eagles have signed Michael Vick to a six-year deal worth $100 million, and around $40 million guaranteed, regardless of retirement or injuries.

Eagles coach Andy Reid said in a statement today regarding the contract,

“I’m very happy we were able to reach an agreement with Michael on this long-term contract…It’s a product of all the hard work Michael has done to better himself over the last couple of years, both on and off the field. I’m very proud that he has been able to achieve success again in this league, but he’ll be the first one to tell you that there is a lot of work yet to be done by him and this team as a whole.”

“There’s no doubt in my mind that he will continue on that path.”
END_OF_DOCUMENT_TOKEN_TO_BE_REPLACED

After a few hours of the white-faced Vick picture being posted, ESPN took the it down and replaced it with a regular picture of the Eagles quarterback.

The article was actually very well written (by Touré, who works for MSNBC, and Fuse) and discussed how Michael Vick might not be in the situation he is in if hewere white, not because a white man wouldn’t receive criticism for animal abuse but because it probably wouldn’t have allowed him to be be exposed to dogfighting in the first place.

END_OF_DOCUMENT_TOKEN_TO_BE_REPLACED

Michael Vick recently told GQ Magazine in an interview that people don’t understand dog fighting, that he’d love to have another dog and that only reporters are upset with him. (In so many words)

Here are some quotes from Michael Vick, (What a charming guy)

“Yeah, you got the family dog and the white picket fence, and you just think that’s all there is. Some of us had to grow up in poverty-stricken urban neighborhoods, and we just had to adapt to our environment.”

“I mean, I was just one of the ones who got exposed, and because of the position I was in, where I was in my life, it went mainstream. A lot of people got out of it after my situation, not because I went to prison but because it was sad for them to see me go through something that was so pointless, that could have been avoided.”

On criticisms from the public/media:

“For a while, it was all ‘Scold Mike Vick, scold Mike Vick, just talk bad about him, like he’s not a person’…It’s almost as if everyone wanted to hate me. But what have I done to anybody? It was something that happened, and it was people trying to make some money.”