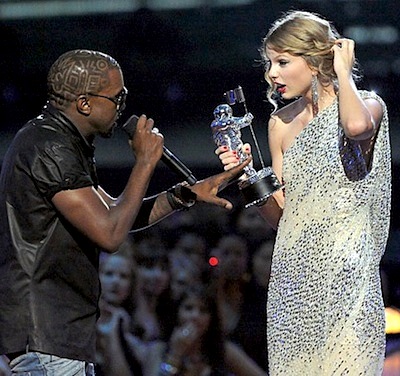 Kanye is like a hemorrhoid that just won’t go away.  You think he’s gone and will stop being such a pain in the ass, and then BOOM, he comes sneaking back, this time in the form of a nearly 4-year-old audio clip immediately following the Taylor Swift VMA incident in 2009.

In the clip, Kanye is flying off the handle in an attempt to justify his actions during the 2009 VMAs when he ran up on stage and killed Taylor Swift’s soul.  Some gems:

“‘Cause there ain’t gonna be no more motherfucking Elvises with no James Browns.” (Solid use of metaphor).  END_OF_DOCUMENT_TOKEN_TO_BE_REPLACED 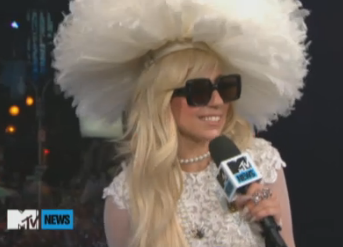 Lady Gaga made a “special” announcement on August 18th about the VMAs (She’s going to open at the show) and she was wearing what seems to be, for her, a normal outfit!?

Besides the birdlike/sea coral combo hat, this is pretty tame.

She appeared at Times Square (former gathering place of TRL fans) to make the inane comment that she will be the opener at the 2011 MTV Video Music Awards on Sunday, August 28th…