Hugh Hefner’s most famous (and oldest?) girlfriend has written a tell-all book detailing her time at the Playboy Mansion.

In Down The Rabbit Hole, 35-year-old Holly Madison apparently describes living at the mansion and being with Hef as a “nightmare” that ultimately led to her “sitting alone in a bathtub contemplating suicide.”  END_OF_DOCUMENT_TOKEN_TO_BE_REPLACED

Playboy is employing Azealia Banks for an upcoming shoot. Banks is famous for songs like “212,” getting into Twitter feuds, and being a rapper who often gets confused with Iggy Azalea (who she affectionately calls “Itchy Areola”) despite not being white or Australian.

Banks will be interviewed by Rob Tannebaum within the April 2015 issue and photographed by Ellen Von Unwerth, whose portfolio includes compromising photos of Rihanna, Christina Aguilera, Beyoncé and Janet Jackson.  END_OF_DOCUMENT_TOKEN_TO_BE_REPLACED

Former number one girlfriend of Hugh “Puffin” Hefner and silicon star of The Girls Next Door (the theme song is still stuck in my head) Holly Madison popped out a 7 pound churren on March 5 and now we know its name.

No need for a drumroll since it’s laid out in the headline. The child’s name is Rainbow Aurora Rotella. Future stripper, professional crafter of daisy chains, or actual My Little Pony.

Aurora, after light displays in nature? Or just the chick with narcolepsy from that one Disney movie.

“I wanted to give my daughter a unique name,” Madison told E!. “Growing up, there was a girl in my school named Rainbow and I was so envious of that name. I thought it was so pretty and unique!”

END_OF_DOCUMENT_TOKEN_TO_BE_REPLACED

In 2011 Crystal called off her wedding to Hef because she thought all that lube would be bad for her psoriasis. Being the business man that he was, Hef stuck a “Runaway Bride Edition” on her cover story as Crystal just happened to be featured on the cover that month.

The gold digger had also admitted on the Howard Stern show that sex with Hef lasted ‘like two seconds’, adding: ‘Then I was just over it. I just like, walked away. I’m not turned on by Hef, sorry.’

What do you expect when you let an octogenarian into your vagina? That’s like saying, “I went to dinner with a Chinese guy but he was too into rice.”

END_OF_DOCUMENT_TOKEN_TO_BE_REPLACED

Hugh Hefner is having an especially dick-raising, money draining week. Not only is he hurting his back watching the help put up Christmas decorations around the mansion, he’s engaged to Crystal Harris for the second time!

Refresher – their first wedding was meant to occur in June of 2011 but Harris retreated in fear when Hef tweeted her a sexy photo what she thought was his wrinkled taint (it was really just of him winking).

Okay, so that’s not exactly what happened. No one knows Harris’ exact reason for bailing the first time. Could be the taint wink, could be that the prenup and will weren’t impressive enough.  END_OF_DOCUMENT_TOKEN_TO_BE_REPLACED

Believe it or not, Jenny McCarthy is back in Playboy. I know, I know. Remember way back in 1993 when she was playmate of the year? Jesus, that was almost 20 years ago. Oh well. There’s nothing like a little plastic surgery and photoshop to combat the ravages of middle age.

This is her, what, seventh time getting naked for money? Well, I guess you go with what you know. What I don’t know how this will affect her campaign to kill children. Oh wait, I’m sorry. I mean her campaign against vaccinations.

“All I wanted to do [when I began in the industry] was work with my clothes on, and now I just hope to get them off!” she joked with E! News during a recent interview.

That sounds like a cry of desperation if I’ve ever heard one.  END_OF_DOCUMENT_TOKEN_TO_BE_REPLACED

First, on Wednesday a grainy photo of the cover for Lindsay Lohan’s “tasteful” Playboy editorial was leaked a week before it hit newsstands. Now the entire inner spread has made its way onto the internet, and excuse the words “inner spread” since the magazine is mostly known for knocker shots.

That’s exactly what this is too, a (sorta) symmetrical ode to Marilyn Monroe. The pictures (below) actually do seem airbrushed, airbrushed to look like they’re from the 50’s. Lindsay was supposed to make a special appearance on The Ellen DeGeneres Show, to reveal the cover, but it hardly seems worth it now that it’s old old news.

TMZ is reporting that Playboy executives are very upset by all of this, since the issue was/is expected to be the biggest seller of 2011.

END_OF_DOCUMENT_TOKEN_TO_BE_REPLACED 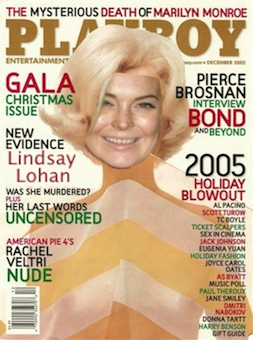 Hopefully it’s around $7.00, because that’s all you’ll have to pay once Lindsay’s Playboy issue is released on the newsstands!

On the other hand, TMZ is reporting that LiLo is receiving nearly a million dollars for her freckly nudity, which we’ve actually already sort of seen in movies like Machete and in her 2008 Monroe spread.

So, aren’t you lucky to be a mere creeper and not Hugh Hefner, who is getting ripped the fuck off. Who says she’ll even show up on time, or at all?

And where does she find time for all this work? You’d think she’d have no openings in between cleaning up corpse body hair and skin particles at the morgue and hiring people to unscrew her ankle bracelet for opium sessions in the subway.