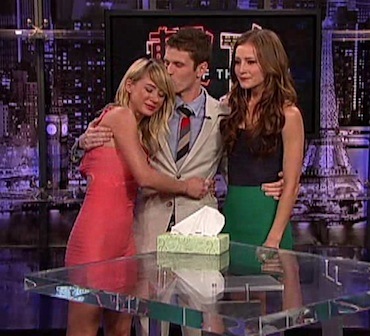 Sad news for gamers and tech junkies. NBC affiliate G4 have officially cancelled Attack of the Show and X-Play.

Fans of both shows were shaken up earlier this year when their two most familiar faces, Adam Sessler and Kevin Pereira, quit the network.

In September it was reported that NBCU was looking to turn the channel into a “TV version of GQ” aimed at the “modern male.” Funny because I thought AOTS and X-Play‘s were already targeted at modern males aka real people.

Home fitness guru Tony Horton stopped by G4’s Attack Of The Show on Wednesday to not only talk about his P90X workout but to whip two of the presenters into shape.

Jessica Chobot (of IGN, Proving Ground) and former Playmate of the Year Sara Underwood don’t struggle terribly with it, but Jessica Chobot does have her moments.  END_OF_DOCUMENT_TOKEN_TO_BE_REPLACED

Thursday, on my favorite clip/talk/random show, G4’s aptly titled Attack Of The Show co-host Candace Bailey and The Feed host/former Playboy playmate Sara Underwood wrestled in a baby pool filled with oatmeal in a tribute to Weird Al’s UHF.