As most of The Hunger Games: Catching Fire takes place in an island environment and was filmed in Hawaii, the stars had to wear form-fitting wetsuits which they peed in on the regular.

Fortunately for Jennifer Lawrence, Jenna Malone and the like, the wetsuits did not show all their ladybits ala “Oops!…I Did It Again” or Miley and Iggy Azalea at the EMAs.

“I was surprised at how little camel toe problem there was,” Lawrence told E!. “I was expecting a lot more.”

“They actually were pretty comfortable once we found you can actually pee through them– just go into the ocean and take care of your business,” Katniss’ fictional partner in one-sided romance, Josh Hutcherson, said of the suits.

END_OF_DOCUMENT_TOKEN_TO_BE_REPLACED

Another Kristen Stewart interview from before the scandal. (ONTD!)

Lupe Fiasco may be quitting rap for literature. (Huffington Post)

Miley Cyrus posted three photos of herself with shockingly short hair on Sunday. It reminds me of the time I went into the “no-no” drawer at age four, stole the scissors and cut random patches of my hair out.

Miley almost looks like she went a little cray with the electric razor, buzzing the sides and leaving a bowl on top like Swedish pop singer Robyn.

Remember when I (and everyone else) was fooled by Maria Sharapova’s wig-wearing adventures? Well this time, it isn’t a trick.

Update: Turns out, it was a wig. A few hours ago Sharapova wrote – “Wow, when I posted those photos with the short hair I had no idea everyone would all go bananza….

“(my dear friends, I never actually said I cut my hair!) so for the sake of my email inbox and it’s stressful 24 hours, I would like to show you the below pictures…

“My hair is still long…and blonde…and well it’s pretty much the same! We did a shoot a few days ago and I sported all types of hair styles…long and yes short (a wig!!!).”

“So what do you guys think?? I kind of love it!” was the message written by Maria Sharapova on her Facebook page Monday evening.

END_OF_DOCUMENT_TOKEN_TO_BE_REPLACED 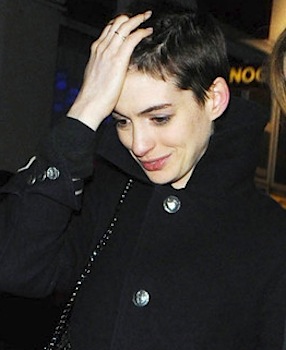 Anne Hathaway chopped off all her hair, joining the pixie likes of Michelle Williams and Emma Watson. It’s a slow day for news, and a Sunday (clearly I write all my articles the day before, that’s why they all seem outdated) so give me a break.

I think she looks a tad like Winona Ryder. Well, less cool. To be fair, no one is/was as cool as Winona Ryder or Juliette Lewis.

Hathaway reportedly cut her hair to prepare for her role as Fantine in Les Miserables.

The Les Mis prostitute thing was done by Uma Thurman in 1998 (I used to rent it from the library all the time) and I’m thinking that Tom Hooper’s 2012 adaptation will simply have a bigger budget and not much else.  END_OF_DOCUMENT_TOKEN_TO_BE_REPLACED

I went from liking Scarlett Johansson in movies like Ghost World, to hating her, then Woody Allen convinced me that I loved her and now I’m pretty sure – I can’t stand her.

In interviews she’s vapid and sugary, and in movies, well, she almost always plays the same person. Some confused girl with a far-away look in her eye. But perhaps that IS Scarlett. I don’t know…