While testifying at the trial of a woman who sent emails about ovulation and sweet sweet love making, Alec Baldwin got himself in big trouble when he called a reporter “dumb.”

MSNBC is punishing him by suspending his interview show, Up Late, for two weeks.

He then insulted the reporter, saying, “You are as dumb as you look. You are with Fox, right?”

On Thursday, Baldwin warded off photographers he felt were getting too close to his family. At one point during the confrontation, he was heard using an anti-gay slur.  Baldwin later used Twitter to call attention to the offensiveness of such language.

Then he apologized for the millionth time, shoved Tina Fey in front of him and shocked her with a cattle prod until she convinced everyone that he’s a sweet and misunderstood guy.

TMZ reports that a young man swam all of two miles just to spy on Taylor Swift in her oceanfront mansion in Rhode Island. (The one she bought for $17 million cash in April.)

Actually, he swam one mile in the penis-freezing cold of the Atlantic and then swam straight back after he saw her beefy security guards patrolling the area.

Hold the “Looks like she found a new boyfriend” or “Ryan Lochte must be bored” jokes. We shouldn’t make fun of the champion stalker with the bravery of a thousand bayonet-wielding mountain lions.

I mean, that’s dedication. Look up the word in the dictionary and you’ll see a photo of this guy’s mugshot. She should really give him a signed photo or show him half a tit or something.  END_OF_DOCUMENT_TOKEN_TO_BE_REPLACED 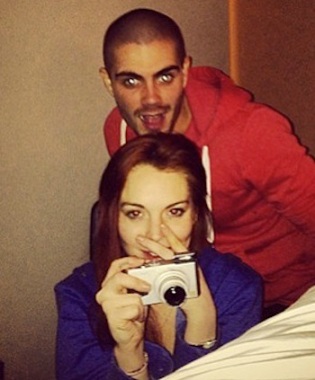 I wasn’t even aware that Lindsay Lohan and The Wanted’s Max George were a real item.

Apparently I’m still living on last year’s news, when Lindsay was peering from behind trees and garbage cans outside The Wanted’s tour bus in hopes of catching a glimpse of him, or taking photos she could later hire someone to edit her face and body into.

I’m also blindly hoping there’s a Goldschlager’s flake of dignity left in her. She did, after all, reportedly turn down $550,000 to fall on her sequined ass on Dancing With The Stars. Girl needs the money so I’m not sure if that’s dignity or stupidity.

You say “tomato” I say DON’T DATE GUYS WHO REFER TO YOU AS “A GROUPIE.”   END_OF_DOCUMENT_TOKEN_TO_BE_REPLACED

A man armed with scissors (not to be confused with “One Armed Scissor” by At The Drive-In) was arrested outside of Miley Cyrus‘s home on Saturday, but was he trying to kill her, or just fix her hair?

KTLA reports that the intruder was merely an over-exuberant fan named Jason Luis Rivera who told police he just wanted to “see” Miley.

Rivera faces burglary and trespassing charges (he hopped the security gate and lit candles in her yard).

“I am a friend of Miley Cyrus. I am. She’s my wife. Me and Miley have been friends for five years,” he told officers.

END_OF_DOCUMENT_TOKEN_TO_BE_REPLACED

No celebrity is safe from death threats, not even the 5’1″ Nova Scotian famous for playing a pregnant teenager in Diablo Cody’s Juno. According to a warrant obtained by TMZ, Ellen Page has received multiple death threats.

The warrant allowed the LAPD to look at several Twitter accounts associated with messages from June. One read, “I’m going to murder Ellen Page. She’s dead.” Another, which indicates that the stalker is a woman, said:

“Ellen Page if you continue to date Alexander I will K-1-L-L you in public in the next year … Be it in a club, at a game, in a restaurant, or when you’re signing autographs.”